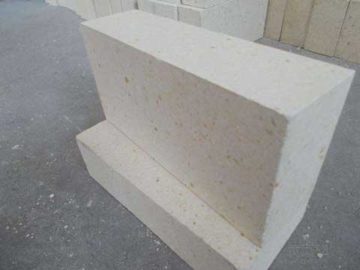 Aluminum oxide is the major components and is of vital importance in many fire bricks due to its high melting point. High alumina bricks and fireclay bricks can be divided based on the content of aluminum oxide:

Bricks with aluminum oxide contained more than 55% are high alumina bricks while those lower than 55% are fire clay bricks.

From the chart above, we could see high alumina brick has a higher refractoriness than fire bricks, it can be classified into high class refractory material.

RUL is an important property of refractory bricks. Research shows, RUL changes with the content of Al2O3. Since fireclay brick contains less Al2O3, its RUL capacity is lower, and are more likely to shrink under high temperature. Therefore, fireclay bricks can only be applied to subordinate parts of the furnaces, being used such as sealing walls of regenerator, lining brick of bottom flue, regenerator lattice brick, linings of furnace door, furnace roof and lining of risers.

As we all know, acidic matters can react with basic matters. As for refractory bricks working in extreme conditions, it is important to make sure they won’t change physical form due to chemical reactions.

Fire clay bricks have more acidic impurities, which can resist corrosion from basic slag or gases but the bricks is much less functional in resisting basic substances.

Under 0~1000℃, fireclay bricks expand as temperature rises, the expansion rate is between 0.6%~0.7%, only half that of silica bricks. As temperature rises up to more than 1200℃, the bulk begins to shrink. The shrinking leads to collapse of the building. This occurs when low melting point material in the brick melted, so that particles are drew closer by surface tension, which leads to reduction in bulk.

Looking for High Alumina Refractory?Leave Your Requirement Now! We Will Reply You In 12 Hours!: