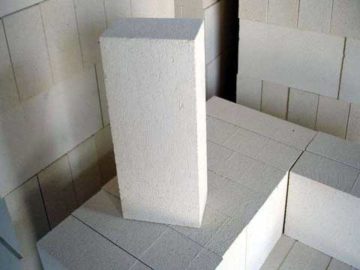 Mullite brick (also called mullite refractory bricks) is a kind of fine refractory material, with stable expansion, good thermal stability, high RUL capacity, low creep under high temperature, anti-chemical erosion ability, and have a hard texture. Currently there are two commonly used ways to manufacture mullite bricks, which are electric melting and sintering. Mullite is the raw material of high-grade refractory material. Zhengzhou Rongsheng Kiln Refractory Material Co., Ltd，located in the center of china, with advanced technology and rich mineral reserves, produces various types of quality mullite products to meet your requirements. If you have any intention to buy mullite bricks, please leave your message below and get the lowest price!

The Mullite bricks are a kind of high alumina refractory brick (see article), with the mullite(3Al2O3•2SiO2) as the main crystalline phase. Commonly, the content of alumina oxides is between 65%～75%. Apart from mullite, the brick also contains a little of those materials with less alumina oxides, such as glass phase, cristobalite, and those with more alumina oxides like corundum.

Their high temperature performance mainly depends on the content of alumina and the uniformity of the phase distribution of mullite and glass.

Firstly, the sintered products have a higher apparent porosity, which provided access for invasion into the brick’s inside.

Secondly, sintered products have smaller crystal phase, and more crystal boundaries. So that crystal are easily being eroded, and the boundaries are more likely to move.

Mullite bricks is a kind of widely applied quality refractory product, they could be used in environment that works under high temperature, such as ceramic, metallurgy, casting, electronics and other industries:

Body and Bottom of Blast Furnace

Mullite is a series of minerals consisting of aluminosilicate. Mullite is a kind of high quality refractory material. Mullite is a mineral produced by aluminum silicate at high temperature. Mullite can be formed by artificial heating of aluminosilicate. There are mainly high-purity fused silica mullite, ordinary fused mullite, all natural bauxite concentrate, sintered mullite and light burned mullite. Mullite ores are used to produce high temperature refractory materials. Mullite is the only stable two element compound in the AI203-SI02 system at atmospheric pressure. The chemical formula is 3AI203-2SI02.

Natural mullite is very few and usually synthesized by sintering or by a capacitor process. Industrial mullite are formed when heating up materials like clay, high alumina materials (such as kyanite, andalusite, silimanite), or ceramics. It is the main component of clay brick, high alumina brick and porcelain.

With 20-year’s devotion to refractory materials, our products have been sold all around the world! Welcome to buy mullite bricks in Rongsheng kiln refractory company and enjoy our quality service! Please leave your message below, and let us make contact with you!

Looking for High Alumina Refractory?Leave Your Requirement Now! We Will Reply You In 12 Hours!: